In a record-breaking year for the Green Flag Award, as the scheme marks its Silver Jubilee, five of Crawley Borough Council’s parks have been celebrating continued success.

The Memorial Gardens, Worth Park, Goffs Park, Ifield Mill Pond and Tilgate Park are among the winners, continuing a long run of awards for the council.

The Green Flag Award is the international quality mark for parks and green spaces and is testament to the hard work and dedication of the teams that make the green spaces places that everyone can enjoy.

For Memorial Gardens, this is its 13th Green Flag. Situated in the heart of the town centre, the gardens are the perfect place for shoppers and workers to relax and enjoy the colourful surroundings.

This is the third consecutive year that Worth Park has been awarded a Green Flag with the historic park’s formal gardens, a stunning fountain, stone balustrading, a listed rockery, a wooded lake, a meadow, croquet lawns and a tennis court impressing the judges. Worth Park has also again received a Green Heritage Site Accreditation.

Ifield Mill Pond has received the Green Flag award for the second year running. Considered the most important wetland site in the town and designated a Site of Nature Conservation Importance, the beautiful area features Bewbush Water Gardens, an area of semi-formal ponds and natural planting.

Green spaces have been more important than ever during the past 18 months, providing access to fresh air and outdoor space, so we’re fortunate to have so many good quality, award-winning parks in Crawley. These latest awards reflect the continued dedication and hard work of all of the staff who maintain our beautiful parks.

The Green Flag Award scheme, managed by environmental charity Keep Britain Tidy under licence from the Department for Levelling Up, Housing and Communities, recognises and rewards well-managed parks and green spaces, setting the benchmark standard for the management of green spaces across the United Kingdom and around the world.

For more information about parks in Crawley visit our parks pages. 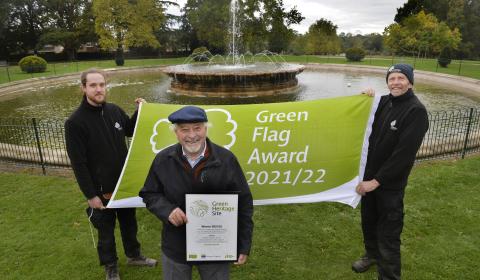