Tilgate Nature Centre has contributed to a new turtle and tortoise study published in the journal Science challenging evolutionary theories of aging.

In the study, researchers used data contributed by Tilgate Nature Centre in collaboration with other zoos and aquariums to examine 52 species of turtles and tortoises. The data recorded by Tilgate Nature Centre in the Species360 Zoological Information Management System (ZIMS) enabled researchers to discover that, unlike humans and other species, turtles and tortoises defy common evolutionary theories and may reduce the rate of aging in response to improvements in environmental conditions.

Evolutionary theories of aging predict that all living organisms weaken and deteriorate with age (a process known as senescence) – and eventually die. Now, using data captured by Tilgate Nature Centre and others, researchers from the Species360 Conservation Science Alliance and the University of Southern Denmark show that certain animal species, such as turtles and tortoises, may exhibit slower or even absent senescence when their living conditions improve.

We are proud that the data that has been collected and curated on the tortoises and turtles at Tilgate Nature Centre has contributed to this study, and helped researchers better understand aging in these species.

Tilgate Nature Centre is a member of Species360, a non-profit organization which maintains ZIMS – the largest database on wildlife in human care. As part of Tilgate Nature Centre’s commitment to conservation and providing high standards of animal welfare, it uses ZIMS to keep detailed records of its animal collections.

For more information about the study and other projects using ZIMS data, visit the Species360 website. 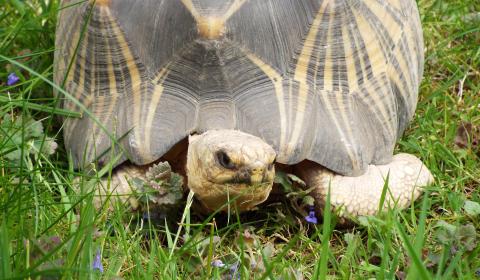