The Baer’s pochard is one of the rarest ducks in the world, with less than 1,000 birds in their wild range across northern and central China, and fewer than 300 birds in zoos across Europe.

Loss of habitat across breeding and wintering grounds due to human encroachment, coupled with hunting and unsustainable egg harvesting, are the main causes of the Baer’s pochard’s demise. The species has been listed as critically endangered by the International Union for Conservation of Nature since 2012.

Captive breeding success for endangered species is vital for future generations.  We’re thrilled to have had eight healthy ducklings hatch here at Tilgate Nature Centre. Why not pop along and if you can spot them if you’re looking for a day out over the Summer holidays? 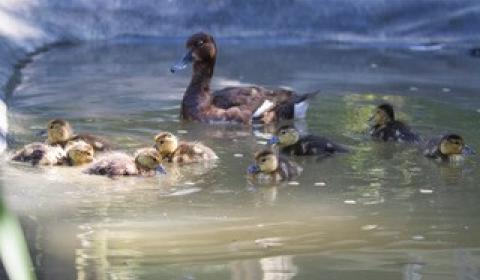