From: Waste and recycling

Two fly-tippers have been fined a total of £520 after rubbish was dumped in Crawley.

In July 2019, dumped trade waste from an address in London was discovered at Buchan Park Kennels on Crawley Borough Council land.

The contents of the fly-tip led the council’s Fraud and Investigations Team to uncover where the rubbish had come from – and who had been paid to remove it.

Although it couldn’t be proved who had dumped the rubbish, the man who collected the rubbish had neither a waste transfer note nor certification of his licence to transport waste. These are offences under the Environmental protection Act 1990 and the Control of Pollution (Amendment) Act 1989.

When traced in April 2021, he agreed to pay two Fixed Penalty Notices (FPN) totalling £400 as an alternative to prosecution.

In September 2020, a man driving a silver Ford Transit was seen to dump various rubbish behind Langley Green Parade including a TV, suitcase, sofa plus black bags and a large cardboard box of household waste.

CCTV from nearby premises recorded the fly-tipping taking place – an offence under the Environmental Protection Act 1990. The man was issued with a £120 FPN.

These fines show that we take fly-tipping seriously; officers will investigate thoroughly to find out where the dumped material has come from and who has dumped it. 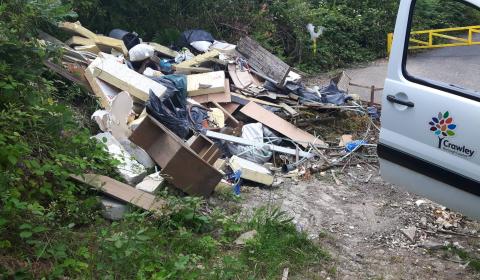