Crawley Borough Council continues to tackle fly-tipping with the promotion of the Let’s SCRAP fly-tipping campaign around the town and the appointment of an Environmental Crime Officer to focus on investigation and proactive management of fly-tipping incidents.

The Let’s SCRAP fly-tipping campaign banners have been posted in strategic locations around Crawley. The initiative aims to reduce fly-tipping and advise residents how they can avoid inadvertently contributing to the problem, by following the SCRAP code. This encourages residents to suspect waste carriers, check they are licenced, refuse unexpected offers of waste disposal, ask how the waste will be disposed of and obtain paperwork

The Let’s SCRAP fly-tipping initiative was launched jointly by West Sussex County Council, district and borough councils in West Sussex, the Environment Agency, the National Farmers’ Union, the Sussex Police and Crime Commissioner, and West Sussex Fire and Rescue Service to tackle fly-tipping across the county. As a criminal offence, fly-tipping is punishable by a fine of up to £50,000 or 12 months' imprisonment if convicted in a magistrates' court. The offence can attract an unlimited fine and up to five years' imprisonment if convicted in a crown court.

Crawley Borough Council has also appointed an Environmental Crime Officer to focus on robust investigation and proactive management of fly-tipping incidents across the borough. This will include taking cases through to prosecution.

We are continuing to crackdown hard on fly-tipping, it’s both detrimental to our environment and costly to clear up for the public. We’ve been clear that we won’t hesitate to prosecute anyone found guilty of fly-tipping. Our new dedicated Environmental Crime Officer will help us thoroughly investigate incidents and bring more offenders to prosecution. The banners aim to promote awareness of fly-tipping issues and we hope they will encourage residents to use a reputable company with a waste carrier’s licence when employing someone to remove their waste.

For more information about the collection and disposal of large items visit our bulky waste page. 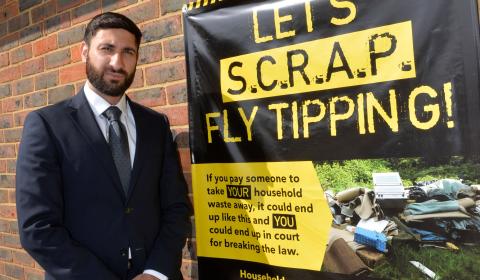