The council is open and visits to the town hall are available by appointment only. Also check the latest COVID-19 advice.

Crawley’s bid to become the first new town to be named a city was submitted to the government last week.

The 2022 bid – on the diamond anniversary of the creation of Crawley New Town – reflects the strength, vibrancy and diversity of our communities and the power of our economy.

The bid is based around the central message of ‘75 years ago, the government made Crawley a New Town. In that time, we have grown to become a regional powerhouse. Imagine what we can achieve if we were a New City’.

The 46-page document includes a summary outlining the bid, an introduction to Crawley, a profile of the town, a map and 50 photographs.

The submission – divided into sections around Crawley as a place to call home, to inspire, to invest, to grow, to do business and to enjoy – also includes details of more than 40 Royal visits to the town.

The council then ran a four-week consultation asking for the views of residents, businesses and stakeholders, some of which have been included in the bid document. Consultation results included:

In 75 years, our home has developed from a small collection of villages, farms and country estates into the largest urban area in the county, with one of the UK’s strongest economies, and the world’s busiest single-runway airport. We’ve even managed to produce some of the country’s leading sporting and cultural figures along the way. As we look towards the next 75 years, city status would recognise the modern, diverse community we have become, the significant contribution the community has and continues to make to the economic and cultural life of the country, as the promise of what is yet to come.

Visit our city bid page to view the bid document.

The government will announce the winners of the competition in early 2022. 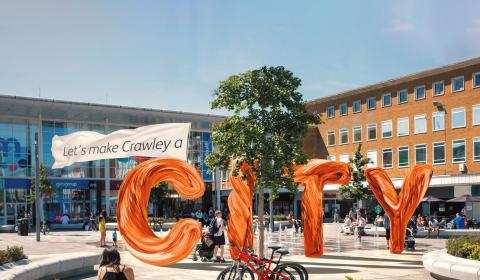