Visit The Leonardslee Earth on display at County Mall

Have you seen The Leonardslee Earth yet?  It is a seven metre diameter, air-filled replica planet on display inside County Mall Shopping Centre until Monday 26 September.

The picture you see of the earth's surface has been created from thousands of satellite images of the planet's continents and oceans collected by NASA (National Aeronautics and Space Administration). It offers visitors a different perspective of human life on earth, illustrating how beautiful earth is and how we need to take action now to protect our planet from the climate emergency it is currently facing. Earth is our home, let’s look after it together.

The detailed imagery on the exhibit was collected by NASA which uses its vantage point in space to study and increase our understanding of our home planet. From rising sea levels to the changing availability of freshwater, NASA enables studies that unravel the complexities of our planet from the highest reaches of earth’s atmosphere. The NASA photographic data helps tackle some of the biggest questions about how our planet has changed and how it is changing now. Human activity is affecting the climate and people across the world are suffering the impacts of global warming.

The first images of earth from space were captured on camera in October 1946 and the first panorama from outer space was taken in March 1947. Later in 1972 with NASA’s Apollo 17 mission, humankind got to see the earth in its entirety as a ‘Blue Marble’ floating in space.

On Saturday 24 September from 11.30am to 4.30pm, Crawley Borough Council is hosting a programme of entertainment at County Mall with a stilt walker, dancers and storytellers including a walkabout performance of The Owl and The Pussycat. 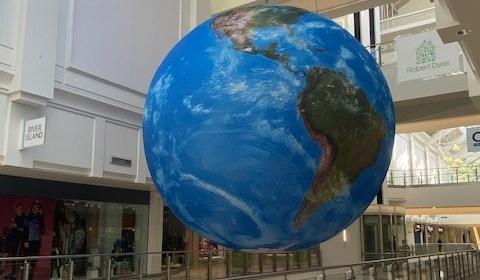