A hawthorn tree has been chosen as one of just 70 ancient trees in the UK to be dedicated to the Queen’s Green Canopy as part of this year’s Platinum Jubilee celebrations.

The common hawthorn (crataegus monogyna), on Crawley Borough Council land next to Constable Road, Tilgate, is believed to be at least 225 years old with a girth of almost 4m. It was put forward as a contender for the Queen’s Green Canopy by the Woodland Trust.

The report reads: “This is an amazing example of an ancient hawthorn. Retained
during the 1960s despite development in the area, the trunk of the tree is hollow and split as if cleaved by a giant. It is rare to find a tree like this in an urban setting.”

The ancient hawthorn is one of only two trees in West Sussex to be selected for the Queen’s Green Canopy; the other is an oak tree in Cowdray Park, Midhurst.

The tree is fragile so the council is investigating how it can provide additional protection to ensure it’s not put under additional stress.

The Queen’s Green Canopy is a unique tree planting initiative as well as the identification of 70 ancient trees and creation of a network of 70 ancient woodlands across the United Kingdom to celebrate Her Majesty’s 70 years of service.

We’re delighted to have this beautiful ancient hawthorn tree dedicated as part of the Queen’s Green Canopy. We have a lot of royal links in Crawley and this prestigious honour is the latest.To be one of only 70 in the whole of the UK is fantastic; as the landowner we are now investigating if we need to give the tree extra protection as well as how we mark this dedication.

The initiative was launched by His Royal Highness The Prince of Wales, who is Patron of The Queen’s Green Canopy, under an ancient sycamore tree at Dumfries House in Scotland.

For more details about trees in Crawley visit our trees page. 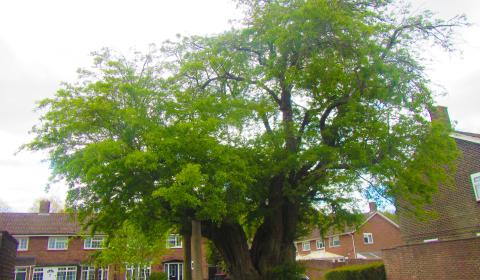